Leader election is a well-studied problem in distributed computing. In our setting, each particle in a connected system (under the usual constraints of the amoebot model) must cooperate to eventually elect a single, unique leader. Said more formally, there must exist some time in the future at which a particle declares itself the leader, after which no other particle may ever do the same.

This paper improves on the algorithm given in the original Leader Election paper (2015) in several ways: 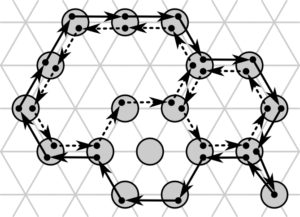 This algorithm is correct with high probability (there is an exponentially small chance that all particles demote themselves during segment setup). Additionally, we show it elects a leader in O(L) asynchronous rounds with high probability, where L is the length of the outer boundary.

As discussed in the Overview, this paper supplants the original Leader Election paper (2015).